The crowning feature of Calvary is a trio of Louis Comfort Tiffany stained glass windows.

With these windows Tiffany perfected his technique known as drapery glass which is the folding of the glass over top of itself to get the layered effect that you see. The robes in the Ascension window for instance, are as much as 1-1/2" to 2" thick. Tiffany also added precious metals to the glass as well. For instance, the Apocalypse window, the window at the back of the sanctuary facing west, the blue in the water is sprinkled with silver, and the crowns and the wings of the angels are sprinkled with gold. These precious metals create an entirely different effect that makes the windows come to life. In the summer around 4 o’clock in the afternoon the water appears to move and ripple.

Each of the three 30-feet tall windows in the sanctuary are dediciated to individuals that were integral to the history of Calvary. The Ascension window was dedicated to one of Calvary's founders, Joseph Horne. The Resurrection window was dedicated to another one of Calvary's founders, CB Shea. The Apocalypse window is dedicated to a man named Bishop Matthew Simpson who married Ellen Verner, a young lady from Pittsburgh and a member of Calvary. Bishop Simpson was the spiritual advisor to President Abraham Lincoln. Lincoln came to Pittsburgh, to Allegheny City, in 1860. After President Lincoln was assassinated, Bishop Simpson rode on the train with his casket and did all of the eulogies from Washington, DC to Illinois. This window is the most expensive window and is dedicated in his honor.

About 10 years ago a project was started to restore the windows that cost over $900,000. The windows were removed, cleaned, and re-leaded. The two middle pictures below were taken during the restoration process. Support bars were installed - the weight of the windows is substantial. The windows are now fully restored after many years of planning and fundraising. All of this has been made possible through the diligent efforts of the Allegheny Historic Preservation Society and the Pittsburgh community at-large. 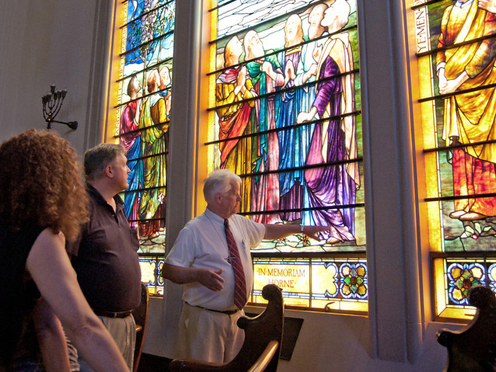 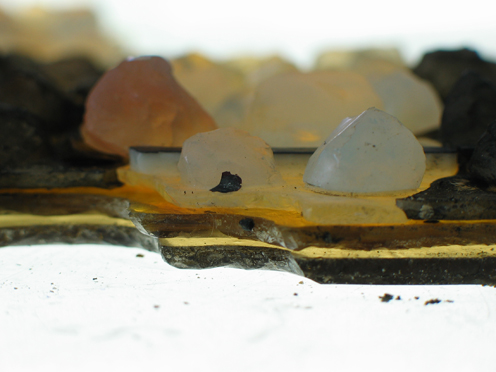 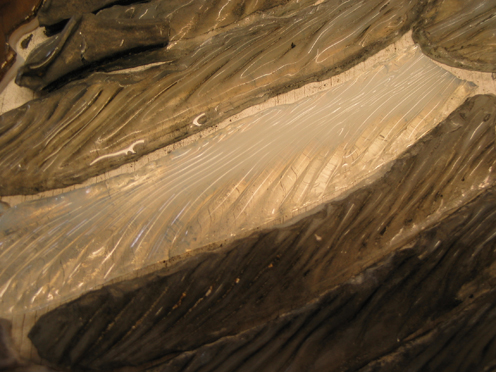 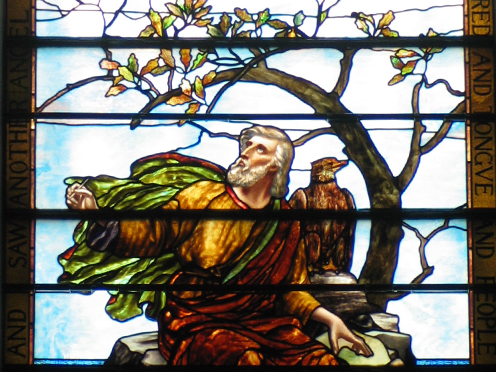 view the Tiffany windows in the height of their glory

Please join us as we view the Tiffany windows in the height of their glory during the Summer Solstice. The evening is accompanied by chamber music featuring Calvary's Music Director Brian Burns on our historic "Farrand & Votey" pipe organ. This event is sponsored by the Calvary United Methodist Women.

Louis Comfort Tiffany changed the physics of making stained glass in America by re-creating the medieval techniques of using solid stained glass instead of painting on glass to create glass designs. He added additional techniques of twisting the glass to get new colors, throwing confetti made of glass onto molten glass, and sandwiching up to five pieces of glass behind each other in a single composition.

And here in the North Side of Pittsburgh, we have Tiffany's three largest windows executed between 1894-95. The subject matter for his windows was chosen by Calvary Methodist Church patrons, but the design was done by the artist. Women in his shops made most of his windows.The Resurrection window is on the northwest side of the church. At the summer solstice, light through the magnificent window is at its peak during the year. Due to the physics of refraction, Tiffany's layered glass changes colors only when the sun comes through at unique angles, such as on Solstice. The Resurrection window has everything - layered glass, confetti glass in the dappled tree leaves, streamer glass, and drapery glass as well as the three panels being a "time-lapse" of events on the day of the resurrection. The Jesus figure, which for most of the year is walking out of an Allegheny Cemetery-like mausoleum, appears suspended on a cross of gold which extends down the steps and transforms the Roman soldiers from blue armor to silver and gold. In the other sun-swept window of the Parousia, the angels wings seem to flutter as they change colors before your eyes.

This event is sponsored by the Calvary United Methodist Women. The bulk of the volunteers required for this event come from this group. However, the Calvary United Methodist Women would still love to have additional volunteers that are not part of the group. Volunteers are needed for poster distribution prior to the event; then refreshments, set up, and tear down on the day of the event. Volunteers typically work a 2-hour shift the day of the event.